(Note - For the purposes of this post, I'll be using the quasi-conventional shorthand of RL to mean 'real life', as opposed to SL meaning 'Second Life'.) 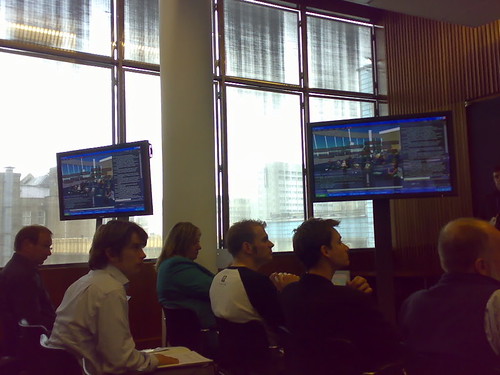 Just got back from the Eduserv Symposium 2007 in London. An interesting event which, however you cut it, became essentially a review of the relevance or otherwise of Second Life to education, despite the title of the conference suggesting virtual worlds in general. Andy Powell (host, and Director of Development, Eduserv Foundation), quite reasonably cited the 'Hoover' example, where a generic product becomes labeled by its most successful or well-known brand. While Andy acted as master of ceremonies in RL, Pete Johnstone performed the same role in SL. Because of inherent limitations in SL regarding numbers of concurrent occupants in any given virtual region, the SL candidates were distributed across three regions. Pete was taking care of all three: it looked like he was working hard all day! This is the first conference I have been to where the 'virtual attendance' of delegates was more than an incidental aspect. In this case it was a core feature of the conference, with the real-life (RL) delegates being able to see the avatars of the delegates attending virtually in SL on several large screens in the auditorium. I had anticipated something like this, but not the prominence of these screens. The effect, for me at least, was of extending the auditorium into SL through large 'windows'. I thought it worked really well - it would have required not a little courage on the part of the organisers to try this. As I was there in RL, I obviously didn't experience the conference from the other side of the 'mirror', but I was able to read some of the comments from the SL delegates and they seemed very positive. The RL event was being streamed to SL, with a 6 second lag.

We saw a number of presentations from people in education & business. Some highlights:

I applaud Eduserv for an ambitious symposium, well executed! I'll be visiting Second Life again as a result. Now where did my avatar wander off to....?